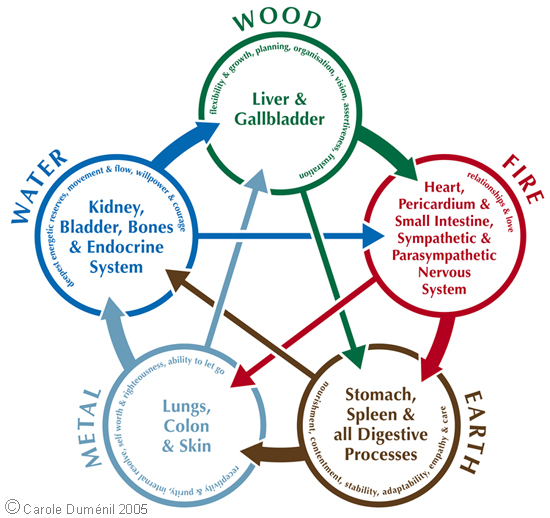 The ancient Chinese believed that all things in the Universe were manifestations of the Five Elements (Wood, Fire, Earth, Metal and Water), and that the human body was a microcosm of the Universe. Hence the laws applied governing Nature were also applied to man, and at the level of the body, the Five Elements were associated to specific organ system, sensory organs, emotions, physical and emotional symptoms, disease tendencies and a general orientation toward life.
Within the framework of the Five Element system, physical findings as well as the person’s history enable the practitioner to organise a diagnosis. This leads to identifying the Element that, under internal or external stress, becomes imbalanced and initiates a state of disease. The resulting treatment will then be designed specifically for each individual, and take into account age, symptoms, general constitution as well as life circumstances. The aim of Five-Element Acupuncture is to treat the underlying weakness, and the person will often report not only the disappearance of the symptoms, but also feeling better generally, referring to such things as increased energy and vitality, greater enjoyment of life, greater confidence, better sleep and a more normal appetite.